Hans Walther started his collection in the early nineties with one cel from his favourite Disney feature Snow White and the Seven Dwarfs (1937). “I saw the cel in the window of the Animation Art Gallery in the Berenstraat in Amsterdam and was immediately sold. The price was a whooping 4500 guilders, more than a month’s salary at that time.” It is a limited edition cel depicting Snow White at the well singing to the birds. It turned out to be the beginning of a diverse collection of hundreds of original cels and drawings. “At the beginning I wanted to have at least one cel from every animation classic, but I soon found there are just too many animation classics! The core of my collection has always been Walt Disney’s Snow White and I am still looking for additions.” Hans Walther’s collection mostly contains cels from major animated features, but also contains  artwork from short films and commercials by Dutch animation artists such as Paul Driessen and Ronald Bijlsma. For the artwork of the latter he recently found a buyer in Hong Kong. “It is difficult to say how much a cel is worth”, Hans Walther explains, “value is what people are willing to pay.”

We discussed Hans Walther’s’ experience with collecting artwork through galleries and auction houses, both internationally and in The Netherlands. The market was at its height in the 1990s. “Prices just went everywhere: an original Disney cel with an original background would easily yield 150.000 to 200.000 guilders” (now roughly 45.000 – 70.000 euro).“ And not only artwork from Disney, also artwork from other important studios like Metro-Goldwyn-Mayer or the Fleischer Studios was sold for considerable prices. Now art dealers still ask relatively high prices for original cels and other artwork from the American studio’s, but the heydays of collecting analogue animation artwork are over.

Hans Walther also gave us an insight in some of the restoration methods used when restoring animation artwork for the market. Some restorers, for example, restored a damaged paint layer with missing paint on a cel by dissolving the paint surrounding the tiny gap and then manipulating the softened paint into the lacuna. There weren’t any restorers specialized in cels at that time. Restorations were executed by artists or by the animation studio that still had some of the original colours.

Hans Walther introduced us to the mounting of cels for commercial purposes. It is a common – and among collectors generally accepted – practice to combine cels from different scenes with a background to make a more appealing picture. The turtle and the rabbit in the image to the right are a good example: in the film Snow White and the Seven Dwarfs the two are never shown together as you see in this setup made of two cels and a background. Another practice, which Hans Walther also uses himself, is the creation of new decorative backgrounds to go with original cels These backgrounds vary from wood veneer to hand drawn copies or photocopied backgrounds.

In the trade in original Disney cels, the creation of new backgrounds that were never used in the original film, was a common practice for which especially the Courvoisier Gallery was famous. The Courvoisier Gallery was the first gallery to specialize in animation artwork. Guthrie Courvoisier started selling Disney Art in 1937 shortly after the release of Snow White. He collaborated with animation artists that had worked on the film at the Disney studio to create new backgrounds and to assemble and prepare the artwork.

A selection of the collection of Hans Walther can be found on his website where almost everything is for sale, you just have to offer the right price! 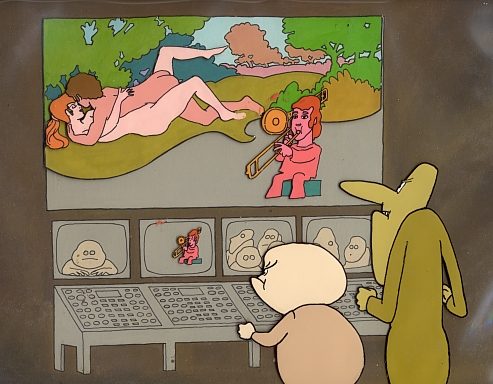