Being one of the very few museums solely dedicated to the art of animation film in the world, the Musée du Film d’Animation in Annecy is of international importance. Animation artwork usually plays an important role in its exhibitions and the museum can be seen as a showcase for current views on the presentation of animation artwork. During the Festival of Animated Film in Annecy we payed a visit to the museum and were kindly given a tour behind the scenes.

A part of the collection of the museum is presented year round in a permanent exhibition on the history of animation in the Ancienne Chapelle du Conservatoire d’Art et d’Histoire. But the Musée du Film d’Animation in cooperation with the Chateau d’Annecy, also curates temporary exhibitions that coincide with the annual Festival of Animated Film in Annecy, a time of the year in which the city hosts over 8000 animation professionals and animation lovers. In 2003, the museum officially joined the Museums of France, which made its collection national cultural heritage and supported the registration and conservation department in its efforts to preserve and provide access to its unique collection of animation artwork.

This years exhibitions were dedicated to guest country China (China, Art in Motion) and the French animator René Laloux (1929-2004). China, Art in Motion presented films, film installations and artwork by artists and filmmakers such as Sun Xun, Haiyang Wang, Wu Chao and Weilun Xia, who are working at the frontiers of contemporary art and animation. The exhibition on René Laloux , one of the first directors to make feature films for both adults as well as children, was a classic oeuvre exhibition featuring his most important films among which Laloux’s first feature, Fantastic Planet that won the Special Jury Prize at Cannes in 1973. Laloux enjoyed working with others and often joined forces with  graphic artists like Roland Topor, the comic book author Jean Giraud (better known as Mœbius) and Philippe Caza.

The presentation of animation artwork

It was refreshing to see artwork exhibited with respect for the dual nature of the object.  On the one hand an animation cel or background is a unique object of art that can have an aesthetic quality independent of the final animation film, on the other hand cels and backgrounds are objects of use that are inextricably connected to the production process and the final film. This studio set-up made up of two cels and a background from the short film La Prisonnière (1988) is a wonderful example: 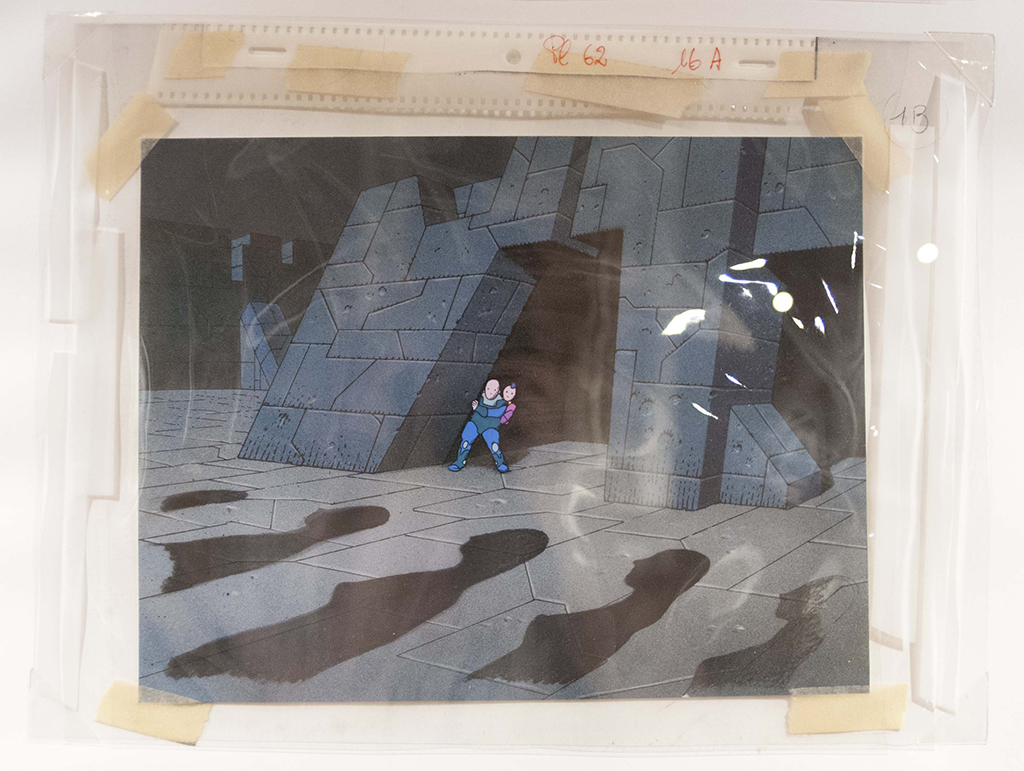 A set-up assembled out of artwork from La Prisonnière (1988) by René Laloux in cooperation with Philippe Caza.
Gouache and felt marker on paper and cellulose acetate foil, self adhesive  tapes and film material.
Mounted with transparent polyester photo corners.

Attached to the artwork is a makeshift header strip that has been cut from the protective leader of a film. The studio has used types of tape one can easily remove and reposition, such as crepe tape and Scotch™ tape, to keep everything together. Several codes have been scribbled on the cels as instructions in the production process. Set-ups presented in this way convey the complexity, laboriousness and the costly process of making an animation film; the studio had to work fast and efficient and its animators had to be extremely precise and consistent.